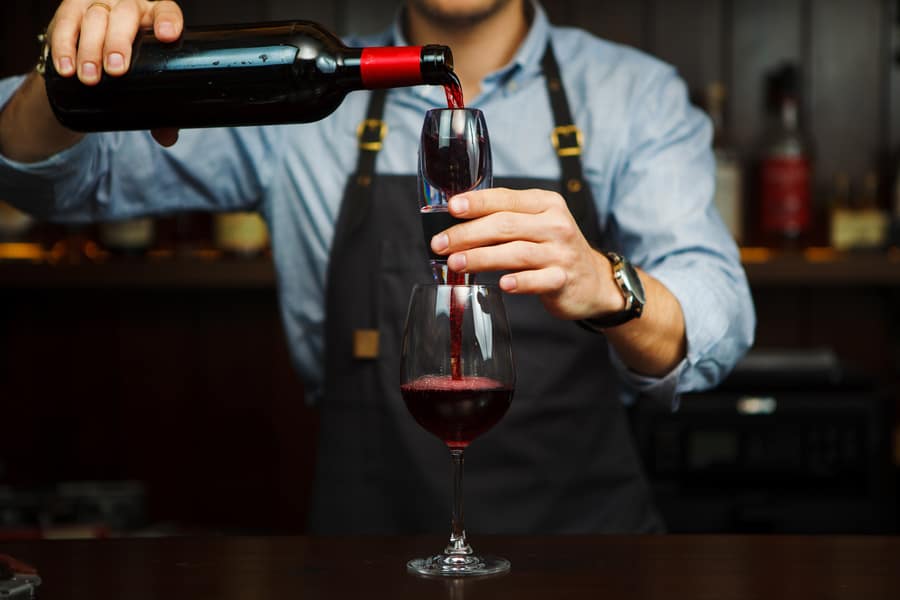 Wine creates experiences worth paying for. But what about worth tipping for? There is a lot of confusion over whether to tip sommeliers and wine professionals for wine ordered, at large events, and even country-to-country. The truth is, it is far simpler than you may expect. Tipping wine professionals is easily navigated using the right approach.

Tipping is generally very appreciated at wineries and wine events in the United States but it will depend on the venue and event type. At large wine events where sommeliers are promoting wine products, they would much prefer you buy the wine they are selling rather than leave a gratuity.

For many wine lovers, part of the allure of wine is the ability to “travel through the glass,” when a wine figuratively transports you to its place of origin. The savory, fragrant herbal notes of a good Chianti Classico can have you strolling in Tuscany, and you can practically feel the sun on your skin while drinking an Albarino from coastal Spain.

As such, wine lovers tend to be a particularly well-traveled group; the natural next step to loving a particular wine region is to go see it for yourself. As seasoned globetrotters, we know that tipping etiquette changes vastly from one country to the next. In one country, workers feel insulted when presented with a tip; in the next, service industry workers might be counting on a certain expected gratuity for their rent.

And in countries where tipping is expected, the customary amount is different from service to service; the valet guys at the hotel lobby expect a different tip than the bartender at the hotel bar. The barber expects a different amount than the barista, and servers seem to be in a world of their own.

If you want to explore new wines and looking for a great, trustworthy seller of wine online, Wine.com is your solution as the World’s Largest Wine Store. They offer hard-to-find and in-demand wine from the best wine regions and wineries across the globe. They ship to most U.S. states. Click here to see how they can meet and exceed your wine expectations.

For a complete list of wine products and accessories I really love, check out this page. You’ll find my recommendations for wine refrigerators, wine decanters, and wine aerators, along with the best place to buy wine online. Click here to see the complete listing.

So when it comes to wine service, specifically from a sommelier, what is the customary tipping practice? What is expected of us as diners at various events and establishments?

Most wine events feature salaried or paid wine staff who do not rely upon gratuity. That said, receiving a generous tip for their hard work will always be welcomed. An easy way to determine if staff expect a tip is locating the presence of a tip jar.

Because there are so many different kinds of wine events, it can be tricky to understand all of the unspoken etiquette rules at each event. The short answer is that, although tips are appreciated to different degrees at wine events, they are never expected or relied upon,  unlike in tipping servers for table service at a restaurant.

The easiest way to see if tips are expected for service at a wine event is if there is a tip jar (not to be confused with a spit bucket!). However, those are quite rare. In large-format, wine-festival style tastings where many wineries are represented in stations pouring samples to the guests, tips are quite out of the norm.

The same goes for ticketed wine dinners in restaurants, especially if the dinner is centered around a specific winery or an importer. While they can be incredibly fun, these tastings and dinners are meant for consumer education, and to encourage attendees to purchase wines and to visit the wineries in the future.

The wine stewards working these events are normally representatives from the winery, the importer, or the distributor; these professionals are either paid a salary by their companies or paid a commission based on their wine sales.

Tipping is quite unexpected in these situations especially because these folks are already earning a professional’s income. Rather than a tip, these representatives would probably prefer that you spend your cash on buying their wines instead.

About once or twice a year, a well-established non-profit in a major city (such as museums and other charities) may hold formal galas to benefit the establishment. These events can feature a multi-course dinner with tableside sommelier service; many of them also feature an auction which tends to feature a wine category as well.

In these types of events, sommeliers are generally volunteering their time for the good cause of the nonprofit. Tips are not expected at these events. However, they are greatly appreciated, as the sommeliers are likely not being paid for their time at all.

And in situations like a grand seated dinner, there may be fewer sommeliers per guest than would be standard at a restaurant. It’s not out of the norm for seasoned attendees to tip their sommelier at the beginning of the event to ensure particularly good service for their party; a discreet $100 bill slipped to the sommelier before dinner would certainly encourage them to prioritize your table.

It’s also not expected but vastly appreciated to tip the sommelier at the end of the event for great service; in these situations, $50-$100 is common for the entire night’s wine service. One thing to note: even in events where it is not encouraged to tip your wine stewards (such as large format tastings and winery-themed dinners), tipping the other service staff is always one of the most sincerely appreciated things you can do as an attendee.

The caterers who make sure that the charcuterie table remains bountiful and the bussers who clear away dirty glasses and full spit buckets tend to be forgotten in the ritz and glitz of a winemaker dinner, or the rush of a large tasting. Without them, the event could not possibly be smooth and enjoyable; perhaps even more than the sommelier, they are some of the most important people in a restaurant or a tasting venue.

Tipping Somms for Wine at Restaraunts

However, sommeliers are in a slightly different situation; many of them are salaried, either as sommeliers or in their dual roles as managers/assistant managers, or bar managers. If the restaurant has the space in their budget to have a dedicated sommelier on staff, it’s quite likely that the restaurant either pays the sommelier out of their budget–either in the form of a salary, or a commission based on a percentage of wine sales.

In almost all other cases, the American sommelier is paid based on tip-share; the diner tips on the bill, which initially goes to the head server assigned to that table. That head server is then responsible for “tipping out”, or paying out a portion of their tip (based on a percentage of the bill), to the service team that helped with that party.

In this structure, the service team includes the back server or server assistant who cleared the dirty dishes and filled the water glasses, the line cook who chopped all those onions, the dishwasher, the host, and yes, the sommelier who sold them the wine.

In these situations, the main expectation is a 20% tip on the bill at the very end of dinner, for a good experience. However, sometimes a sommelier is able to significantly expand your world of wine, showing you a new favorite; after all, that is the job–for many of us, one of the best parts of the job. If you’ve moved to tip the sommelier as thanks for this exceptional experience, it’s definitely well-appreciated in this setting.

If you’d like to tip the sommelier separately, it’s easiest to do so in cash, as any amount left on the credit card receipt will go towards your main server’s tip and tipouts. However, if you request that a certain portion of the tip go to the sommelier, that can generally be arranged.

In terms of the amount, if you’ve splurged on a nice wine or a few nice bottles per the sommelier’s suggestions, it’s standard practice to tip 20% to the server on everything but the wine, and 10% to the sommelier on the wine itself. 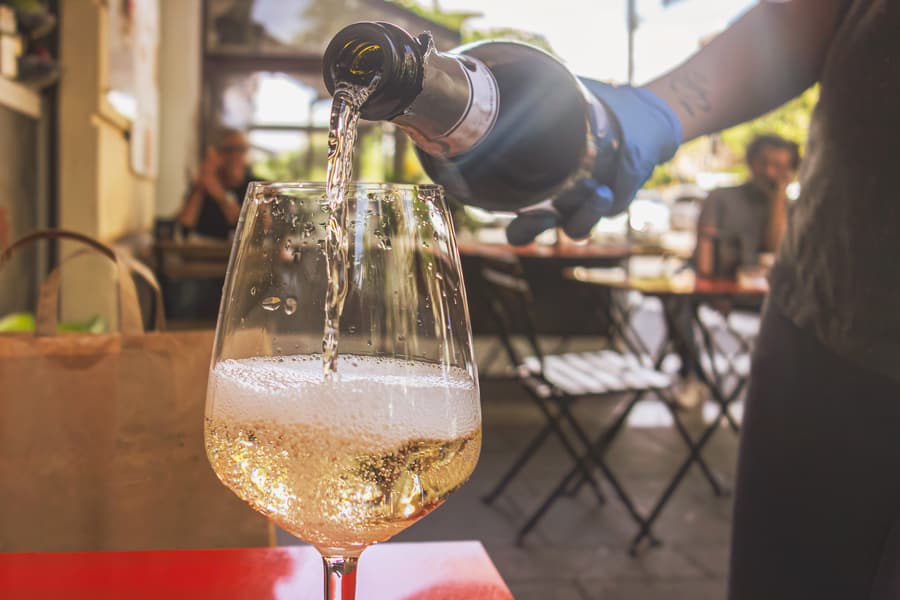 Tipping Sommeliers Outside of the United States

Tipping practices to sommeliers for services vary from country to country, but in the European Union along with Australia and New Zealand, gratuity is built into laws to ensure these wine professionals are compensated for their work. In Japan, on the other hand, a wine professional may politely refuse your tip as good service is the expectation.

We have quite the history of tips in the United States, as well as a notoriously thin margin in the American restaurant business due to, in part, the unforgiving nature of commercial rent. This, coupled with the ever-rising cost of living, ends up resulting in what is perhaps the most aggressive tipping culture in the world.

Many countries within the European Union actually have laws in place to ensure gratuity. This amount will already be included in the check, either as a separate service charge, or calculated into the cost of the menu items, including the wine bill. The situation is similar in Australia and New Zealand, where service workers, including wine stewards, are paid a liveable wage and do not rely on their tips to make their living.

African countries are definitely a case-by-case basis; because of its history of colonization by various European powers, as well as its non-homogenous religious and cultural traditions, it’s difficult to generalize any aspect of African countries, including tip culture. In countries that do accept tips, 10-15%, without any additional expectations about wine, seems to be a good rule of thumb.

In East and South Asia, tipping is quite rare, generally speaking. Good service is simply expected as a part of life, and the cost of labor is almost always calculated into the menu price. Do not be surprised if the sommelier politely refuses a tip in East Asia, especially in Japan.

Sommeliers are an exceedingly rare breed in Southwest Asia for obvious reasons, but in countries like Qatar, Saudi Arabia, and the Emirates, a 10-15% tip to your server is customary, usually on top of the 10% government-mandated service charge.

Ahry Ko is a Certified Sommelier hailing from Atlanta, Georgia. She is passionate about the world of beverages, with a strong focus on fine wine, craft beer, and spirits. She studied political science at Emory University, but fell in love with wine and hasn’t looked back since. When she isn’t attending tastings, writing articles, or studying for wine exams, you can find her in the kitchen baking some excessively complicated pastry, or playing with her dog Lily.

link to How to Store Cabernet Sauvignon (A Complete Storage Guide)

Cabernet Sauvignon is the most widely planted and one of the best-known wines across the globe, and it is especially renowned for its ability to age and mature in the bottle for decades. For anyone...

Moscato is one of the most popular wines on earth. It is only growing in popularity as more and more wine drinkers are meeting it for the first time. But so many people are unsure of how to store...

It is my goal to provide you the most factual and straight-forward wine storage guidance humanly possible. I want you to properly store your wine both short and long-term like a pro.

PinotSquirrel.com is a participant in the Amazon Services LLC Associates Program, an affiliate advertising program designed to provide a means for sites to earn advertising fees by advertising and linking to Amazon.com. This site also participates in affiliate programs with other affiliate sites and programs. PinotSquirrel.com is compensated for referring traffic and business to these companies. This site does not constitute medical or safety advice, please consult a licensed medical doctor or health official in your area for such advice.